Printed/semi-cursive first or cursive from the outset?

In the United Kingdom and the United States, the convention is to teach children to write in manuscript (printed or semi-cursive) when they begin formal schooling, and then to teach them cursive script several years later. Many European children are taught cursive script from the outset.

Mastering cursive from the beginning of schooling does not present extra difficulties for learners. Pupils have no problem recognising printed letters in books (contrary to common assumption), and the movements involved in writing cursive are more regular. Lower case letters begin at the same place - on the line -, and the pencil moves in the same direction, whereas there are many different starting positions and initial pencil directions for printed and semi-cursive letters.

Comparison of pencil starting points in cursive and printed script. 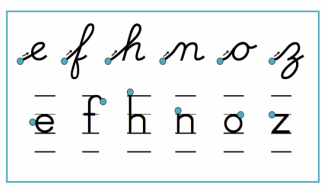 Teaching Sequence
To spend the early years teaching children to form letters in one way, only to ask them to unlearn it all in order to master joined handwriting in KS2 is bizarre, yet this is what happens in most UK schools.  It may even cause unnecessary delays in the development of other English skills.

Evidence-based research is lacking, but a Canadian team conducted a study comparing the effects of learning exclusively manuscript, exclusively cursive or a combination of the two, and found that “the  development of writing skills in primary school is better served by teaching a single handwriting style (cursive or manuscript) to avoid dual learning.” They also detected that “ Cursive style students (...) were the only ones who showed an improvement in syntax.“   The full text of the study can be found here.

There are many styles of cursive handwriting, some of which are semi-joined styles.  These may be easier for pupils transferring from a printed script, but they probably don't lend themselves to the development of speed and fluency as well as a fully joined style.